skip to main | skip to sidebar

A HowTo Guide For My Crock Pot Methods

IMPORTANT EDIT: Too many people are misunderstanding this post and I actually considered deleting it because of the messages I've been getting. This is an absolute LAST RESORT process for LARGE BONES with tough stuck on skin/ligaments only after maceration has already been done. This is NOT for a fast and easy way to clean your remains. You will destroy your bones quickly that way! Especially if they are small/thin. They will crumble in your hands and you will be very sad. I don't want anyone getting mad at me for misunderstanding this post. SO YOU'VE BEEN WARNED! Stick to maceration and be patient. For strong solid bones it take a lot of time, period. I have been processing bones for over 30 years, I know this stuff very well. If you are new at this do not do it.

I've mentioned here previously in my 'Bad Words: BOIL & BLEACH' post that my last resort for removing tough stuck on ligaments, skin and etc from bones is a crock pot. But I didn't really go into much detail. So this is my instructional guide for that.

This crock pot method is one of my own invention. I've never met anyone else that does it. It has worked well for me since the early 90s when I first started using it. I've further mastered it since and figured out other ways to use it for bone processing tasks... and I've used the same trusty crock pot all these years.

When I have a really stuck on flesh mass, ligaments or something similar that maceration has not removed I use the crock pot as a last resort to remove it from the bone. Most of the time it works within hours but in tough cases I've had to leave it overnight or a full 24 hours.

I like to add a metal veggie steamer/strainer to the bottom of the crock pot to minimize the bones/teeth actually touching the hot ceramic pot since it is this extreme heat that can damage them. But if you can find a metal strainer that fits in your crock pot that won't rust, that will work well too.

This method is also a good way to carefully clean smaller more fragile bones that may start to break down during maceration. Put them in a metal screen style tea strainer if they are that small to keep from losing them, or another smaller metal strainer that will fit into the crock pot.

The reason I do this in a crock pot and not stove top is because I like to carefully regulate the temperature. Stove top simmering always seems to eventually boil. The lowest setting on my crock pot never boils. I've discussed why boiling bones is bad in my 'Bad Words: BOIL & BLEACH' post.

I fill the crock pot with water well above the bone and put it on low and replace the lid. Being sure to top off the water as it evaporates. Best part is that there is nothing to do. You just put your bones into the crock pot and go do something else. Just like when you use it to cook dinner. Vultures had literally just pulled the outer skin off this opossum so I decided to do a slow simmer in the crock pot instead of maceration. This worked very quickly with the flesh still so fresh/soft.

There's really not much of a need to add anything to the water. The slow constant heat alone will get the toughest dried on mummified skin off of anything. Often overnight. Sometimes I pour out what has cooked off overnight, add new water and start again... if it is something really fleshy like a mummified head. These turtle skulls started off whole mummified heads before I added them to the crock pot. The process is so gentle that even the keratin sheaths (or rhamphotheca) that covers the upper and lower turtles jaws were unharmed. These partial coyote skulls were quite visibly greasy so I put them in the crock pot overnight with some dish soap. The next morning a good amount of grease was at the top of the water. To easily remove the grease from the crock pot so it doesn't get back onto the skulls when removing them I just scooped it out with a spoon. Doesn't get any easier than that. Remember as I discussed previously in my post 'Bad Words: BOIL & BLEACH' that boiling bone will draw the grease further inside the bone. So don't do that to remove the natural fats in animal remains.

Another thing I use the crock pot for it to soften bone so that it is easier for me to remove teeth. This worked well for these wild boar mandible fragments. The bone became soft enough after a couple days for me to use pliers and wrenches to carefully smash and break the mandible apart and extract the teeth. Much more about this at my 'Extracting Teeth From Bone' blog post.

My crock pot method works beautifully. Very low maintenance. Rarely any need to scrub anything from the bones afterwords. I've never even had any need to find another method. I do wish though that crock pots came MUCH LARGER...haha

I hope you enjoy my HowTo blog posts. For most of the time I've been collecting and processing bones the internet was not yet around and this info was not commonly found in books either. So I've had over 30 years of trial and error figuring out these things on my own. I decided to save everyone some time that comes across my blog and let them in on a few of my trade secrets. And hopefully keep some bones from being destroyed in the process.
Posted by Jana Miller at 1:46 AM 12 comments:

Apologies in advance! I get countless messages in many online locations daily about bone processing, bone ID, etc. Please try to find your... 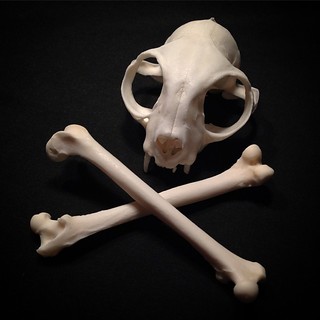 I wanted to point out that there will be photos here that may be offensive to some people. Namely, photos of dead animals. I want you to be aware that I never have nor ever will kill an animal for my bone collection. Thank you.

A little bit about me

Jana Miller
I'm a photographer, artist, jeweler, bone collector and naturalist living in the deep-country on the Nature Coast of Florida. A cat and dog whisper, broken wing and heart mender, angel of mercy, and animal saint. Just trying to make myself a better person daily.

Music Makes My World Go Round

For Your Viewing Pleasure